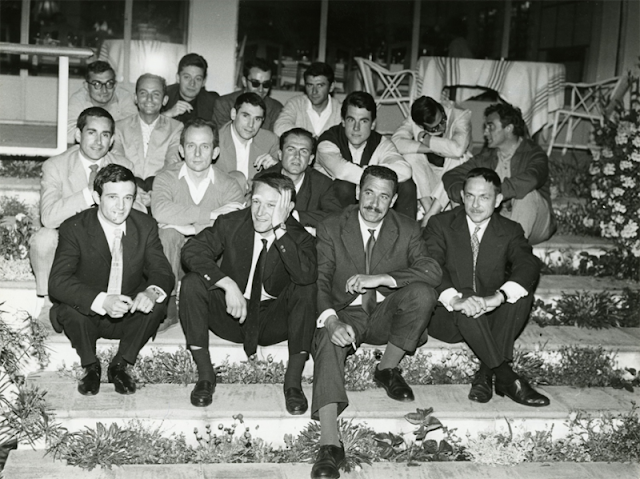 Having found myself with some additional free time (for reasons obvious to anyone reading this at the time of publication), I've decided to try my hand at a straight-ahead French translation, a first. The piece I chose is from the March 2020 edition of the great Trafic film journal, three letters from the vastly underrated filmmaker Jean-Daniel Pollet to his mentor at-times, François Truffaut. The two interlocutors, who connected in the late 1950's at the time of their initial successes, present an odd pair; the dynamic Truffaut, an admired critic and cinematic wunderkind who became one of the most commercially-viable filmmakers of his generation, and Pollet, a little-known New Wave outlier best known for stern, poetic works that evoked Resnais and captivated Godard. Still, there is some stylistic overlap. Pollet's more conventional comedic efforts, which he alternated with his more abstract works, approached the feel-good tone of Truffaut's most popular films. Pollet's fondness for one particular actor (Claude Melki) as his on-screen alter ego also recalls Truffaut's symbiosis with Jean-Pierre Leaud. In addition to any similarities, it seems the two shared, at some point at least, some degree of mutual professional respect.

Along with the letters, I've translated a short forward by filmmaker and writer Jean-Daniel Fargier, a long-time friend and collaborator of Pollet's. Sadly, the retrospective of Jean-Daniel Pollet's films set for March 2020 at the Cinémathèque Française (which certainly spurred the publication of these letters) has been postponed due to the unforeseen international emergency. Luckily, as a sort of consolation, Les Éditions de l’Œil has recently issued eight of Pollet's newly-restored films on DVD with accompanying booklets, as well as a sorely needed biography of the relatively mysterious director by Fargier. Each and every one of these editions is highly recommended.

Issue 113 of Trafic can be purchased here. I would certainly urge all French-reading cinephiles to subscribe. With the unfortunate recent demise of Cahiers du Cinéma, Trafic is literally peerless among film journals.

Truffaut saved everything, scripts, correspondences, photos taken on set. His archives contain many treasures that find their way, little by little, to various publications. Pollet threw away (almost) everything. A pity. We will never know exactly how the young director of The 400 Blows responded to a request from the very young director of As Long as You Get Drunk… [i] to have a look at the script for his first feature film. Nevertheless, we get an idea by reading between the lines of Jean-Daniel Pollet’s response to the comments by his famous elder.

What is striking in this exchange is the strong sense of complicity, founded on mutual esteem. Truffaut had just won at Cannes with his first feature, and had written a few months earlier in Arts, after seeing the premiere of his “little brother’s” [ii] first short film crowned with a Golden Lion at Venice, a magnificent review that compared its author to Jean Vigo, before making this prediction: “At 21 years old, Jean-Daniel Pollet displays a sensitivity and a vitality that make him one of the four or five best emerging French filmmakers.” We can read this on page 467 of the collection Chroniques d'«Arts-Spectacles» 1954-1958, compiled by Bernard Bastide for Éditions Gallimard. [iii]

It is also thanks to Bernard Bastide that are able to publish these letters from Pollet to Truffaut. He generously shared his discoveries with us, made while perusing Truffaut’s papers at the Cinémathèque Française with the intention of assembling a collection of his favorite filmmaker’s correspondences with writers. Thanks to our comrade from Nîmes!

We are also very grateful to Laura Truffaut, who manages her father’s estate in concert with her two sisters, Eva and Joséphine, for authorizing this publication.

I hardly know you, but I take great pleasure in the news of the success of your film, which makes me wish for you, as if it were for myself, the best at Cannes. The unanimous praise that I hear from all sides for The 400 Blows, from people incapable of false praise or snobbery, increases my desire to see your film… which, as it is, you certainly don’t like, but don’t cut too much of it, so there’s some left for the street (?).

2.
Reply to Truffaut’s response to his script for The Bastion (Le Bastion) (which would be made as Line of Sight [La Ligne de mire] in 1960)

I received your letter with great joy, and I thank you sincerely for your interest in my project. I too would be very happy to discuss it further with you. I also impatiently await an opportunity to see your film, about which I’ve only heard good things said (except by the director of Regent!).

Regarding the similarities of my script to The Rules of the Game, which I have seen twice (unlike my friend F. Mazel [iv]), they don’t concern me, though they now seem obvious. Nevertheless, it would be futile to try to determine how many of them stem from accident and how many from influence. I should, however, be wary of them. Perhaps unfortunately, I’ve reached a point where it may be too difficult to modify the structure of our script. My belief is that the spirit and style with which (I hope) we treat The Bastion, which are quite different from those of The Rules of the Game, are the best guarantees against the seemingly inevitable script similarities.

The Bastion will have nothing of a continuous game of hide and seek, nor do I pretend that it will achieve the complexity and richness of The Rules of the Game. Everything will be simpler, more direct. There will be no “game” for one to enter into, no “game of love and chance,” [v] none of the enticing “moods of Marianne.” [vi]

Ultimately, I hope to not make a “sub-Rules of the Game,” which would be excruciating, as any comparison that comes to mind would of course be unfavorable to me.

Regarding the hunting sequences, it is inevitable that they directly recall The Rules because hunting can only be shown from so many perspectives. There’s that of the trapper, that of the butcher, and that of the butcher who believes he is a trapper, the most common in our country. Here, I am less afraid. There is no more plagiarism, or even resemblance, as there is practically no choice is in the method of shooting it. There is only the renewal of the same elements. Moreover, above the theme of hunting, there will be that of war.

I will stop for fear of boring you. Besides, if you preferred, it would be simpler to give you a detailed treatment with dialogue, which I have completed. Then you will easily be able to tell me if the danger is diminishing or increasing.

Looking forward to hearing from you.

Love is Gay, Love is Sad will open at the Publicis-Vendôme [viii] on Friday. The decision was made 48 hours ago, and the publicity resources that have been pledged are quite feeble.

Renoir and Resnais, one year ago, and Chabrol more recently, have, in their kindness, expressed their appreciation of my film with a few quotes. Their statements constitute an essential element upon which I rely to avoid an all-too discreet premiere.

I would like, or wish if it’s more effective, to see your name join theirs, if you thought it possible after attending one of these preview screenings:

If you cannot make it to any of these screenings, you can let me know at 222 85 83 and I can organize a screening at your convenience.

In hopes that this is not a bother to you, I send all my love.


[i] Pourvu qu'on ait l'ivresse... (1958), Pollet's first short film, distributed by Cocinor, the same company that marketed Truffaut's breakthrough feature. (link to view)
[ii] Fargier used the French word "cadet," which, militaristic English connotations aside, means "youngest sibling."
[iii] Released in March 2019. (link)
[iv] François Mazel, writer and brother-law of Pollet. Mazel is credited with the story and dialogue for Pollet's aborted first feature, Lost Nights (Les Nuits Perdues), undertaken and abandoned in 1958. (source)
[v] A reference to The Game of Love and Chance (Le Jeu de l'amour et du hasard, 1730), a romantic comedy written by Marivaux in the tradition of the Commedia dell'arte. Presumably, a dig at the staidness of The Rules of the Game.
[vi] A reference to The Moods of Marianne (Les Caprices de Marianne, 1833), a play by Alfred de Musset that served as the basis for The Rules of the Game.
[vii] L'amour c'est gai, l'amour c'est triste (1971), Pollet's fifth feature and one his "commercial" projects, starring Bernadette Lafont and Chantal Goya alongside his actor of choice, Claude Melki.
[viii] Movie theater formerly located on the Champs-Élysées.
Posted by Andrew Castillo at 5:06 PM